Children of a lesser god, Part 3

This week, we find ourselves thinking about another group of very vulnerable human lives, those that are less than 6 days old, or so. Like newly hatched sea turtles returning to the ocean from the beach, the journey of the youngest children, from the fallopian tube to the uterus is fraught with hazard and, even under the best circumstances, it is estimated that up to 75% of fertilized eggs fail to implant (1). In typical irony of our culture of death, “animal rights” groups advocate strongly for protected beaches and turtle “safe havens” to give the newly hatched younglings a better chance of making it to the sea, while “reproductive rights” groups (often with the same membership as the “animal rights” groups) advocate strongly for the ability to kill the newly fertilized unborn human beings, and equate this choice to kill human lives as a “fundamental right”. (Although the word “choice” is frequently thrown about in euphemistic discussions on “reproductive health and freedom”, there does not seem to be much choice involved, as the child is killed 99.5% of the time. In 2020-2021, Planned Parenthood performed nearly 400,000 abortions, with just about 2,000 referrals for adoption (2). A better euphemism for “choice” might be, “slipped through the cracks”).

Ovulation, fertilization, transport, implantation, growth and development of an unborn child is a marvelously complex and elegant process and, like many biologic processes, truly underscores the grace and beauty of God’s hand in an incredible design (or really coincidental and random convergence of a million different events, for the atheists out there). For those interested in the biology, there are many well-done secular descriptions of the process of pregnancy on the web and the details are outside of the scope of this discussion. For brevity, a woman’s egg is released at ovulation and enters the fallopian tube, where it may encounter a sperm cell, or three. Fertilization occurs and the newly created human life travels through the tube, into the uterus and then implants into the lining. From the time of ovulation, this process takes about 8-12 days (3). Once implanted, the embryo continues to grow and develop, and, in about 8 and a half months, a child is born.

How to most efficiently end these human lives struggling to get to the uterus, implant and develop into children? Why, by contraception, of course. There is a lot of talk about “abortion pills” in the popular press and the vast majority of what most people consider to be “abortion”, in the common parlance, is performed utilizing this method. In a shadow genocide, however, untold millions of human lives are ended before they are ever recognized as existing and the process of systematic elimination of these humans has been reduced to a simple daily pill, long-term injection or uterine implant. It’s a lot easier to kill something if one is never aware of the killing in the first place. Words and analogies fail here, but it might be akin to spraying beaches with Agent Orange or DDT to kill the baby turtle eggs before they are hatched, and can then be washed away with the ebb tide, like so much detritus.

If you are surprised by this, you are not alone. The contraception industry is extremely profitable for big pharma, compromising about $20 billion yearly for pills, $2 billion for intrauterine devices (IUD’s) and $800 million for long-acting, hormonal implants under the skin (4-6). In round numbers, about $23 billion per year (a lot, even by US defense contractor standards). And the names of pills are the pleasant-sounding creations of the ad world, like Aviane, Levora and Yasmin. Certainly those are more marketable than something like (in the words of George Carlin) Prag-Not, Embry-NO!, Fetus Fail or Kiddie Kill! (7). (Interesting that, in 1972, when Carlin did this comedy routine, there was no confusion about whether birth control pills killed a human life, but that knowledge has faded). Additionally, like many issues of science and medicine, what is popular has replaced what is true, and the full consideration of how contraceptives work is poorly understood by most medical students and not thoroughly taught in their obstetrics and pharmacology classes.

Most ingested or implanted contraceptives work in 3 basic ways. Usually by modifying hormonal balance, that is, by increasing levels of progesterone and estrogen, they: 1. Prevent ovulation, 2. Thicken cervical mucus and make it difficult for sperm to enter and survive in the uterus on their way to the fallopian tubes and 3. (here’s the kicker) prevent implantation of the newly fertilized embryo. IUD’s work much the same way, with the addition of the mineral copper to the hormones, which makes the uterus inhospitable for sperm. In a strictly secular sense, all of this is ok, until point #3. If ovulation never occurs and/or sperm never enter the uterus, fertilization does not occur and a new human life is not created. The problem is, there are no good studies demonstrating how often the process progresses to #3, that is, how often a new, unique human being, created in the image and likeness of God, is then killed by being unable to implant in the uterus. It is likely a minority of the time, but a significant minority (and possibly a majority, depending on the timing of use) (8).  Furthermore, there is no good way to know that pregnancy has occurred and, even if known, there is no way to “rescue” the embryo, as the lining of the uterus has been modified to make implantation nearly impossible. Used properly, oral contraceptives have a 99% success rate of preventing human life (9). So, systematic extermination of the youngest and most vulnerable humans has been reduced to a daily pill, no more than a vitamin, or a long-lasting, one-time injection or small implant. I suspect Heinrich Himmler would be jealous.

Our society is, unquestionably, in decline. The nuclear family, a cornerstone of civilization, has been fractured. US divorce rates exceed 50% (10), single parent (usually the mother) households fail to provide guidance, structure and discipline found when both parents are present and engaged in their children’s lives. Crime, drug abuse, alcoholism, teenage pregnancy, sexually-transmitted diseases, pornography, abortion and psychiatric disease are at epidemic proportions. Birth rate is insufficient to meet population decrease and political discussion and commentary have been replaced by conflict, hate and violence. The ready availability of contraception has detached sex from accountability and responsibility. Of course, abortion, a lack of emphasis on marriage and the family, irreligiosity and lukewarm, relativistic morals and ethics are all contributing factors to this decline, but casual and effective contraception are among the proximate and enabling causes. It is not surprising that the media echo chamber, in the post-Roe era, prominently trumpet, “they are coming for your contraception next” as an attention-grabbing scare tactic.

Sexual congress in the setting of marriage is a gift from God, bringing a man and a woman closer together, stabilizing the family, promoting life and strengthening the marriage. The primary purpose of sex is procreation and continuation of the species. The fact that it is a pleasurable act is also God’s gift, but like many of our gifts is a two-edged sword, when indulged to excess and without consequence. Consent to sex is consent to pregnancy, always (with the tragic exception of rape, previously discussed). Abrogation of this responsibility has led to the genocide of 65 million unborn children following Roe v Wade, and uncounted numbers through abortifacient contraception.

As usual, the Catholic position on contraception is clear, simple and true. It is always intrinsically wrong to use contraception to prevent new human beings from coming into existence. As noted by Pope Paul VI in his 1968 encyclical, contraception is “any action which, either in anticipation of the conjugal act [sexual intercourse], or in its accomplishment, or in the development of its natural consequences, proposes, whether as an end or as a means, to render procreation impossible” (Humanae Vitae 14). This includes sterilization, condoms and other barrier methods, spermicides, coitus interruptus (withdrawal method), the Pill, and all other such methods (11). Popular media to the contrary, the Catholic Church is not unaware of the challenges faced by married couples and the advantages of family planning and reasonable spacing of children. The well-being of families and children demands responsible family growth, within the financial and practical means available. To this end, natural contraception, by refraining from sexual activity during periods of the menstrual cycle when fertilization is more likely to occur, is ethical and acceptable. It is well-known that marriages in which artificial contraception is used are more prone to infidelity, divorce, disrespect and conflict. When the sexual act is simply pursued for pleasure, without marriage and family, men and women see each other as mere objects of selfish pleasure, rather than respected and beloved companions, bound to each other for life in the Sacrament of Holy Matrimony. There are also real medical risks of artificial contraception, including heart disease, stroke and cancer, but these pale in comparison to the damage done when sex is disconnected from consequence and responsibility.

In this Christmas season, we are reminded that the savior of us all, the world and mankind, came to be as an infant from an unplanned, “crisis” pregnancy. The infant Jesus reminds us that the smallest and most vulnerable of us are the most important and worthy of protection, praise and worship. Indeed, the first person to celebrate the presence of Jesus Christ on earth, was an unborn child, in the womb of Elizabeth:

”During those days Mary set out and traveled to the hill country in haste to a town of Judah, where she entered the house of Zechariah and greeted Elizabeth. When Elizabeth heard Mary’s greeting, the infant leaped in her womb, and Elizabeth, filled with the Holy Spirit, cried out in a loud voice and said, “Most blessed are you among women, and blessed is the fruit of your womb. And how does this happen to me, that the mother of my Lord should come to me? For at the moment the sound of your greeting reached my ears, the infant in my womb leaped for joy. Blessed are you who believed that what was spoken to you by the Lord would be fulfilled.” (Luke 1:39-45)

How much clearer could the Lord be? 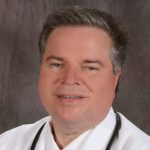